When the Gan 251 M was first released their only released the Leap version which I would have thought would be the last to be released, it has a much more complicated mechanism with the new Large angle magnetic alignment system but that was released first. I personally think that the Gan 251 M Pro is the best for me but I would recommend anyone who wants to get into 2x2x2 seriously should try the Gan 251 M Leap because it would probably be good but is weird and requires some getting used to. 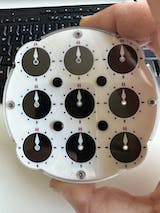